Multiyear sponsorship will include brand-specific programming throughout NFL calendar

NEW YORK, June 16, 2021 /PRNewswire/ -- The National Football League (NFL) today welcomed Diageo, a global leader in beverage alcohol, as its first ever Official Spirits Sponsor. The multiyear sponsorship is uniquely structured with the NFL fan in mind and will include opportunities for on-site activation and engagement with adult fans, as well as broadcast, digital, and social content from NFL Kickoff through the Super Bowl. 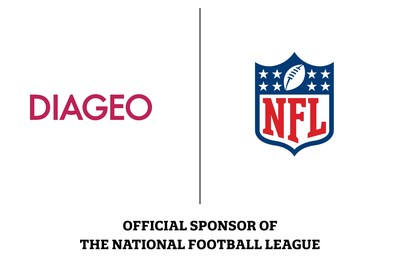 For years, Crown Royal Canadian Whisky has had a significant footprint with the NFL, and this sponsorship takes it to the next level for Diageo. Featuring some of the biggest spirits brands in the world in Smirnoff Vodka, Captain Morgan Original Spiced Rum, and Crown Royal Whisky, this collaboration will include Responsible Drinking programs, integration into marquee events (such as NFL Honors) and, starting with the 2022 season, involvement in the NFL International Series games in London.

"NFL games have the powerful ability to bring people together, and that very much ties into what our brands at Diageo are all about: bringing people together to celebrate life," said Ed Pilkington, Chief Marketing & Innovation Officer, Diageo North America. "This is a perfect match. We are energized about bringing new and exciting programs and experiences to the NFL's passionate adult fan base, while continuing to use our platform to champion social responsibility in every way."

"We're thrilled to welcome Diageo, a global leader in the spirits industry, to the NFL family as our first ever spirits sponsor," said Renie Anderson, Chief Revenue Officer and Executive Vice President of NFL Partnerships. "We look forward to working with Diageo on innovative programs to elevate their business, as well as furthering the important message around responsible drinking."

Diageo's role as the first ever Official Spirits Sponsor of the NFL is just the latest example of the company breaking ground in sports and entertainment. In 2017, Crown Royal became the first spirits brand to advertise during a televised NFL game with its "Water Break" Responsible Drinking campaign encouraging moderation. Back in 2004, Diageo became the first company in the industry to partner with NASCAR after the auto racing company lifted its longstanding ban on distilled spirits sponsors.

As part of this new sponsorship, Captain Morgan Original Spiced Rum will be a presenting sponsor of the NFL's Fan of the Year contest. Through this League-wide contest, each of the 32 clubs will select a fan of legal drinking age to be that particular club's Fan of the Year and receive a once in a lifetime Super Bowl experience, with the ultimate winner revealed during NFL Honors at Super Bowl LVI in Los Angeles. Fans can nominate themselves, or others, at nfl.com/fanoftheyear.

Diageo is listed on both the New York Stock Exchange (NYSE: DEO) and the London Stock Exchange (LSE: DGE) and their products are sold in more than 180 countries around the world.