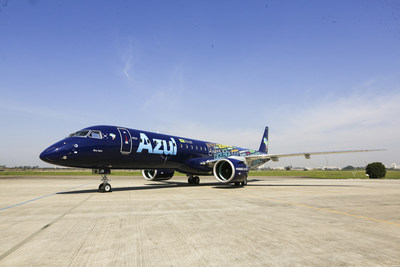 "We are thrilled to be the first airline in the world to put the E195-E2 into commercial service," said John Rodgerson, CEO at Azul Linhas Aereas. "I would like to thank Embraer, AerCap and Pratt & Whitney for providing such an exceptional addition to our growing fleet. The game-changing GTF technology will enable us to fly quieter, consume less fuel and reduce emissions."

Azul continues to grow in Brazil in terms of departures and cities served, with 820 daily departures to 113 destinations, creating a network of 223 non-stop routes. The airline, which currently operates a fleet of 34 ATR 72-600 aircraft powered by Pratt & Whitney PW127M turboprop engines, has 51 E195-E2 aircraft on firm order. Pratt & Whitney will also provide Azul with engine maintenance through a 12-year EngineWise® Comprehensive service agreement.

"On behalf of the entire Pratt & Whitney team, I'd like to congratulate Embraer and Azul Linhas Aereas on this exciting occasion. We are honored to power the E195-E2 and look forward to delivering the GTF's significant economic and environmental benefits when it enters service next month," said Chris Calio, president, Commercial Engines at Pratt & Whitney. "Azul has been a driving force in Brazil's commercial air travel growth, and we are proud to expand our relationship."

In addition to being selected as the exclusive engine for the E2 commercial aircraft, Pratt & Whitney's APS2600E auxiliary power unit (APU) is the sole-sourced APU for the E2 family. The APS2600E APU gives airlines greater flexibility, by increasing the altitude ceiling for ETOPS and other operations, and providing a significant increase in electrical power delivery, to meet the needs of today's airlines.

The E195-E2 aircraft has more than 25.4% reduction in fuel burn per seat than the previous-generation E195, with NOx emissions 50% below the ICAO CAEP/6 regulation and 19dB to 20dB of ICAO Chapter 4 cumulative noise margin.

About Pratt & Whitney
Pratt & Whitney is a world leader in the design, manufacture and service of aircraft and helicopter engines, and auxiliary power units. United Technologies Corp., based in Farmington, Connecticut, provides high-technology systems and services to the building and aerospace industries. To learn more about UTC, visit its website at www.utc.com, or follow the company on Twitter: @UTC. To receive Pratt & Whitney press releases and other news directly, please sign up here.

This press release contains forward-looking statements concerning future business opportunities. Actual results may differ materially from those projected as a result of certain risks and uncertainties, including but not limited to changes in levels of demand in the aerospace industry, in levels of air travel, and in the number of aircraft to be built; challenges in the design, development, production support, performance and realization of the anticipated benefits of advanced technologies; as well as other risks and uncertainties, including but not limited to those detailed from time to time in United Technologies Corp.'s Securities and Exchange Commission filings.