Over 100+ Venues Being Explored as Polling Sites 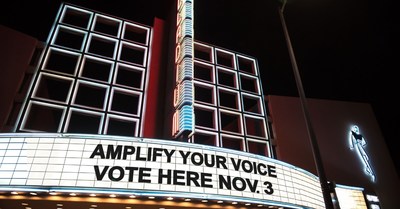 "Core to what we do at Live Nation is helping amplify voices on stage around the world, and supporting voting is another important way we want to continue making voices heard," said Michael Rapino, President and CEO of Live Nation. "We're honored to work with such incredible partners and will do everything in our power to support and empower voter engagement among our employees and the public."

Live Nation is working with local officials to examine the feasibility of using more than 100 Live Nation venues across the country as polling places. To date, The Wiltern and Hollywood Palladium in Los Angeles, Emo's in Austin and the Buckhead Theatre in Atlanta are confirmed to serve as polling sites in their respective jurisdictions, and The Fillmore has been offered with warm reception to serve its local neighborhood in Philadelphia and is in the final stages of the vetting process.

"Live Nation is going above and beyond by recognizing that elections are about more than just polling places. They're about our communities," said Al Schmidt, City Commissioner of Philadelphia. "Live Nation is really stepping up to help during this challenging time - and we are grateful."

"We are proud to partner with Live Nation and announce The Hollywood Palladium and The Wiltern will be Vote Centers in the upcoming Presidential General Election," said Dean C. Logan, Los Angeles County Registrar-Recorder/County Clerk. "Live Nation has stepped up to the mic in providing our community safe in-person voting experiences at two iconic music venues. It is collaborations such as this that demonstrate the spirit of community engagement and the strength of our democracy."

To support these efforts, the company is partnering with More Than A Vote, a coalition of Black athletes and artists dedicated to protecting voting rights, and Civic Alliance, a nonpartisan coalition of businesses working together to build a future where everyone can vote, volunteer, and take action to shape our country.

"By converting their concert venues into voting locations, Live Nation is creating a safe and convenient way for people to exercise their right to vote this fall," said Michael Tyler, EVP of Public Affairs More Than A Vote. "Similar to the sports arenas More Than A Vote has worked to convert into voting locations, many of Live Nation's venues are located in the heart of the communities that we are committed to empowering in this election and offer the same COVID protections due to their large capacity."

As it usually does, Live Nation will provide up to one half-day of paid time off to all employees on Election Day. Furthermore, in an effort to address the national shortage of poll workers caused by the COVID-19 pandemic, Live Nation will provide any active employee with a full day of paid time off to serve at the polls. The company is partnering with Power the Polls to track employee participation and meet the needs for poll workers in communities across the nation.

Leading up to Election Day, Live Nation has also partnered with HeadCount, a non-partisan organization to use the power of music and amplify artist voices to inspire fans to register to vote and promote participation in democracy. Citizens can visit www.headcount.org/livenation to check their voter registration status and learn how to exercise their right to vote in November.

About More Than A Vote

More than a Vote, a non-profit coalition of Black athletes and artists working together to educate, energize and protect young communities of color by fighting the lies and systemic, racist voter suppression that stands in the way of Black voices being heard.

About the Civic Alliance

The Civic Alliance is a nonpartisan business coalition that strengthens our democracy by supporting safe, trusted, and accessible elections and inspiring every American to participate in shaping our country's future. Founded by the CAA Foundation and Democracy Works, the Civic Alliance cultivates a community of companies united by a shared belief that an active democracy is good for business and an engaged business community is good for democracy. With its valuable tools, resources, events, and partnership opportunities, the Civic Alliance helps its more than 150 member companies engage their employees and consumers as active participants in civic life. Join us at civicalliance.com.

About Power the Polls

Power the Polls is a first-of-its-kind initiative to recruit poll workers to ensure a safe, fair election for all voters. Amidst a nationwide poll worker shortage, Power the Polls is part of the solution through education, recruitment, and business engagement. Power the Polls was launched in June 2020 by a coalition of businesses and nonprofits, including Civic Alliance, Comedy Central, Fair Elections Center, Levi Strauss & Co, MTV, Patagonia, Pizza to the Polls, Time To Vote, Uber, and We Can Vote. The website utilizes data from Work Elections, a unique website developed by Fair Elections Center that centralizes information on poll worker requirements and links to applications for more than 4,000 election jurisdictions around the country.

HeadCount is a non-partisan, non-profit organization that promotes participation in democracy through music, culture, and digital media. Since 2004 the organization has registered over 700,000 voters and worked with a long list of musicians and partners including Ariana Grande, Billie Eilish, Camila Cabello, Dave Matthews Band, JAY-Z, Beyoncé, March for Our Lives, RuPaul's DragCon, MTV, and Dead & Company. With 40,000 volunteers, street teams in most major U.S. cities, and presence at more than 1,000 events each year, HeadCount ranks as one of the most active grassroots civic participation organizations in the United States. Following COVID-19 restrictions, the organization quickly pivoted to an all-digital approach that led to innovation and online initiatives to fill the needs of the public in using their voices in democracy. For more information, visit HeadCount.org.