LOS ANGELES, Feb. 11, 2020 /PRNewswire/ -- Multi-Latin GRAMMY award winner, Alejandro Fernández has announced the United States, Canada and Europe concert dates for his 'HECHO EN MÉXICO' WORLD TOUR. Produced by Live Nation, the United States and Canada tour kicks off May 22 in Fresno, California at the Save Mart Center and will wrap up on September 20 in San Antonio, Texas at the AT&T Center and includes Fernández's first show in Toronto, Canada, at Meridian Hall. The European tour is produced by Planet Events @ Live Nation and includes his first ever shows in London and Paris. Full tour details below. 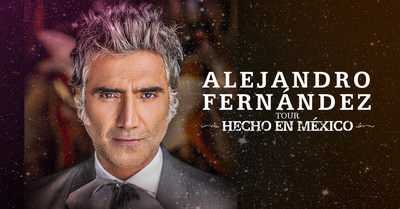 Alejandro Fernández recently announced the release of his long-awaited new album, 'HECHO EN MÉXICO' (MADE IN MEXICO), available HERE for pre-order and on all digital platforms starting February 14. 'HECHO EN MÉXICO' marks his return to the mariachi ranchera format popularized by his father, and living-legend, Vicente Fernández. The album tells stories of love and heartbreak, with "El Potrillo" (as he is lovingly called) demonstrating his once-in-a-generation vocal talent while paying tribute to a genre whose spirit is deeply ingrained in the hearts and souls of Latinos everywhere.

Tickets go on sale to the general public beginning Friday, February 14 at 9AM local time at Ticketmaster.com. Every online ticket purchased for the United States and Canada 'HECHO EN MÉXICO' tour includes one physical CD copy of the new album. Tickets for the European dates will be available at www.ticketmaster.es, www.ticketmaster.fr, and www.ticketmaster.co.uk.

'HECHO EN MÉXICO' includes hit single "Caballero," which quickly became a fan-favorite in Latin America and the United States, leading digital and radio charts in Mexico and the United States. It also includes Fernández's most recent single, "Te Olvidé" (I Forgot You), among other great songs, and features collaborations with composers such as Christian Nodal, Luis Carlos Monroy, Jorge Massias and Chico Elizalde, and it was recorded between Barcelona, Los Angeles and New York, and produced by renowned producer Áureo Baqueiro.

Alejandro Fernández ("El Potrillo") has sold more than 35 million records worldwide and won countless awards and nominations. He has achieved numerous #1 hits on the Mexico, U.S., Spain, and Latin America charts, including his latest single, "Caballero." Throughout his career, Alejandro has collaborated with many musical powerhouses including Beyoncé, Christina Aguilera, Gloria Estefan, Marc Anthony, Rod Stewart, Plácido Domingo, Morat, Sebastián Yatra, and more. Throughout his prolific musical career, he has been proud and stayed true to his roots, taking Mexican music to the world stage, and continuing his father's legacy.