In fourth-quarter 2012, Singulair sales in the U.S. declined $932 million, or 97%, resultant from a loss of marketing exclusivity on August 3. Global sales, which fell 30% in FY 2012 to $3.9 billion, will experience a similar decline in coming months, due to patent expiry in major European markets later this month. 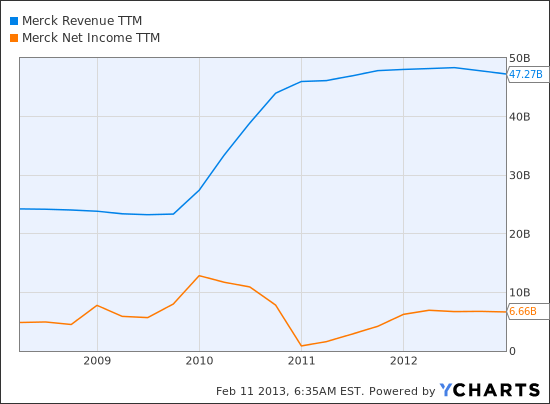 As Merck looks to reset its revenue base, the Januvia brand remains critical to its financial health. In FY 2012, global sales of the combined diabetes franchise of Januvia/Janumet (which contains the popular type-2 diabetes drug metformin) grew 23% to $5.7 billion, primarily driven by growth in the United States and Japan. Januvia (sitagliptin), approved in October 2006, is the first diabetes drug in a new class called dipeptidyl peptidase 4 (DPP-4) inhibitors. The DPP-4 inhibitors help to control blood sugar levels through multiple pathways. Principally, however, it’s thought to exert its glycemic control by reversibly blocking the enzyme DPP-4, thereby increasing endogenous incretin levels (GLP-1 and GIP), which in turn increase insulin secretion, decreasing gastric emptying and blood glucose levels.

Fears that the recent U.S. regulatory approval of Takeda’s Nesina (alogliptin) will mute the growth of Januvia are unfounded. The Japanese drug maker’s DPP-4 inhibitor is attempting to launch on a crowded beachhead – facing established rivals, none of which have scored any notable inroads against Januvia. For example, Tradjenta (linagliptin), launched by Eli Lilly (LLY) in June 2011, posted anemic sales in first-half 2012 of just $59.2 million (despite a niche marketing message focusing on alleged benefits for those type-2 diabetics with renal impairment).

On the company’s fourth-quarter 2012 earnings call, chief executive Ken Frazier told analysts that “despite multiple competitors in the market, the Januvia family retained over a 70% share of the global DPP-IV market.” Irrespective of subtle differences in chemical moiety, most diabetes caregivers believe that Januvia, Nesina– and other DPP-IV agents still in clinical development – are clinically indistinct (offer similar efficacy and safety).

How does one, therefore, explain Merck’s commercial success with Januvia? That Januvia continues to outperform all other DPP-IV inhibitors might have as much to do with marketing muscle as luck. In part, Januvia’s success can be attributed to its first-mover advantage: Merck had a three-year window in the U.S. to build brand awareness and usage with providers, key opinion leaders, payers and patients before another DPP-IV hit U.S. pharmacy shelves. The company was also first to market with the metformin/DPP-IV combination drug, Janumet.

In addition, given the strength of its balance sheet, the company can afford to absorb the adverse impact of patent expiry while it restructures its product portfolio: In the past few years, on average, Merck has spent more than $20 billion annually on drug development, sales, and marketing initiatives. 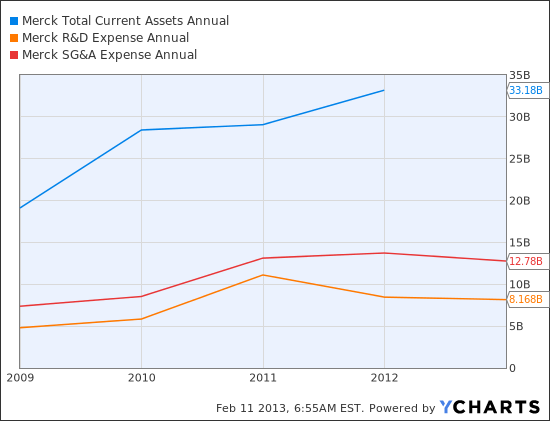 On January 13, an FDA advisory panel voted 10 to 5 in favor of approving J&J’s novel SGLT2 inhibitor Invokana (canagliflozin) for the treatment of adult-onset type-2 diabetes. Notwithstanding cardiovascular and renal safety concerns, regulatory approval and subsequent launch of the drug in the U.S. could come as early as June.

If commercial success correlated linearly with advertising dollars spent, then Merck investors would have reason to worry about J&J. As the following YChart demonstrates, the manufacturer of Band-Aids, Tylenol, and prescription biologics has the financial resources to engage in a marketing slugfest with Merck: 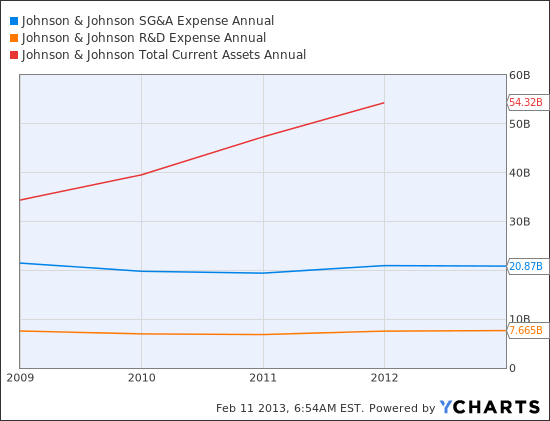 Maddening though it may be, epidemiology and the prevalence of adult-onset type-2 diabetes shows a booming business for big pharma : According to the National Institute of Health, between 2009 and 2034, the number of people with diabetes will increase from 23.7 million to 44.1 million. During this period, annual diabetes-related spending is expected to increase from $113 billion to $336 billion (2007 dollars).

Invokana offers treatment providers a different pathway to wrestle with glycemic control. This first-in-class anti-hyperglycemic agent is an oral inhibitor of sodium glucose co-transporter-2 (SGLT2). Simply, patients lower plasma glucose through urination. Albeit some comparative studies do demonstrate slightly lower reductions in glycosylated hemoglobin (A1-c) with the SGLT2 inhibitors; however, this efficacy must be balanced against potentially negative side effects, including urinary tract infections and decreases in bone density.

Looking ahead, the dynamics associated with being first out of the gate will continue to benefit Merck’s Januvia franchise as it consolidates its leading position among DPP-IV inhibitors. Annual sales could hit $9.7 billion by 2018, according to analytics firm EvaluatePharma.

With respect to Invokana, being the first SGLT2 to market will help distance the drug from follow-on “me-too” SGLT2 drugs, such as Taisho Pharmaceuticals’ luseogliflozin and Eli Lilly’s empagliflozin (both of which are in late-stage clinical development) . Until long-term safety data is available, however, Invokana faces an uphill struggle to dethrone the Januvia king.

David J. Phillips, a contributing editor at YCharts, is a former equity analyst. His journalism has appeared in Bloomberg BusinessWeek, Forbes, and Kiplinger's Personal Finance. From 2008 to 2011, David was a reporter for CBS News Interactive. He can be reached at editor@ycharts.com.