Chicken to Buy Foreclosed Homes? REIT Does It

Institutional investors have been busy elbowing their way into a real estate investment segment previously occupied mostly by small investors: renting out single-family homes. Over the past few years Blackstone (BX) has invested an estimated $4 billion scooping up thousands of foreclosed and REO single family homes. Colony Capital is on track to invest $2.2 billion on the same play. And it didn’t take too long for mass landlording to be securitized for the masses: Silver Bay Realty Trust (SBY) went public last December. The new REIT is focused solely on owning single family homes. At a recent closing price of $19 a share you can own a small piece of the 3,400 homes Silver Bay owned at the start of this year.

Silver Bay managed to land a spot in the Russell 2000 index in April, not bad for a company less than a year old.

Turns out, Silver Bay is actually a private equity investment gone public. Silver Bay has no employees; it relies solely on the 80 or so employees of its advisor, PRCM. And PRCM is a joint venture of an affiliate of the $5 billion Pine River Capital hedge fund and Provident Real Estate Advisors, run by Irvin Kessler, a long-time hedge fund manager (he founded Deephaven in the 1990s and left in 2002 when the fund had grown to $1.3 billion.) The first batch of single family homes that seeded the start up were acquired from another Pine River entity (Two Harbors (TWO)) and Provident. Brian Taylor, the head of the Pine River empire is chairman of Silver Bay’s board. Kessler is vice chairman.

Investors in Silver Bay will be paying PRCM an annual advisory fee of 1.5% of the company’s fully diluted market cap. (That includes the value of warrants and unexercised options). Here’s just the basic market cap: 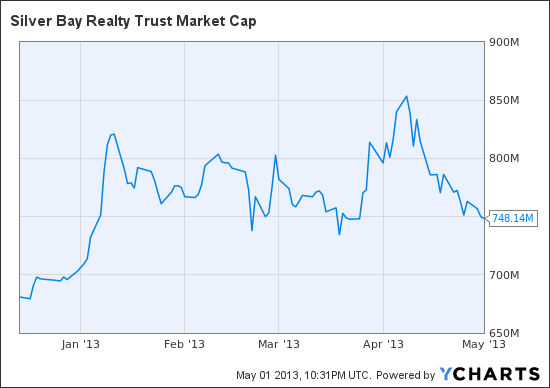 At the current $750 million or so market cap that would be a nice $11 million extra annual income stream for management this year.

Whether it’s as compelling for Silver Bay stock investors is going to depend on your outlook for single-family home rentals. At first glance it seems like a no brainer. Even after the 8% rise in the Case-Shiller Home Price index over the past 12 months, that same index is still 27% below its 2006 high.

And demand for rentals is strong, albeit for many unfortunate reasons: foreclosures, still-high unemployment, stagnant wages for the employed, and a return to sane lending standards that will inevitably disqualify prospective buyers who would have been able to easily buy a home during the bubble insanity. 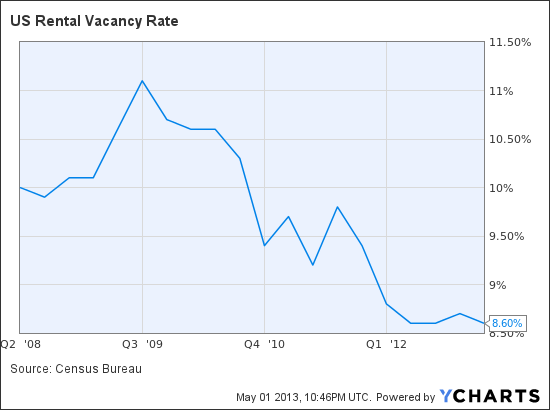 The thing is, right now the institutional money rush into single-family homes is pushing down rents in many markets where the big money is most active. Jed Kolko, chief economist at Trulia (TRLA) recently scoured the real estate data firm’s listings and found that while the average asking rental price for apartments rose 2.9% in the 12 months through March -- a nice 1% ahead of the inflation rate -- single-family home asking rents rose an average of 0.1%.

Rental asking prices dropped in Las Vegas (-1.9%), Fort Lauderdale (-1.2%) Orange County (-0.7%), and San Diego (-0.1%). Phoenix asking rents rose 0.3% and in Atlanta 0.8%, which is below the 2% rate of inflation. Those are regions Silver Bay is investing in. On the bright side is Silver Bay’s investments in Orlando, as well as Dallas and Houston, where asking rents all rose at least 3.5% according to Trulia.

The ability to increase rents is paramount to the company’s growth. After all, shareholders don’t have the luxury of pocketing an annual management fee. They need for the underlying business to deliver.

In just it’s first few months, the stock has been insanely volatile, as seen in a stock chart. 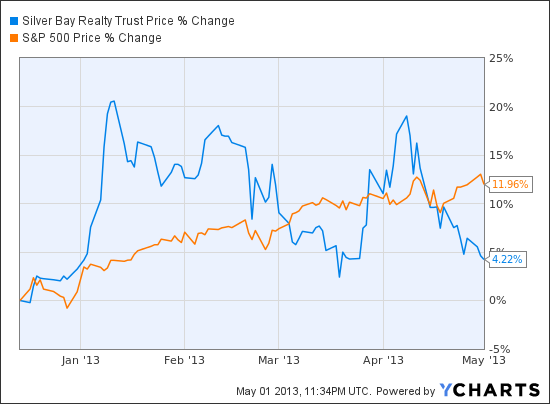 Not necessarily unsurprising for an emerging growth company that is barely out the door, and a bit of a trailblazer.

Some seemingly intriguing news this week is that Steve Cohen’s SAC reported it now owns nearly 6% of outstanding shares. Sounds like a lot until you do the math: it’s about $44 million, a rounding error for the $20 billion hedge fund, and less than one-third what Cohen recently shelled out for a Picasso.

Recently, short interest has spiked. Perhaps that’s a price to be paid as a liquid way other investors can hedge a long position on residential real estate. That said, Silver Bay isn’t even fully operational, as a chunk of properties are in re-hab before they are ready to hit the rental market. In its year end filing it reported an 83% occupancy rate for properties it has owned for at least six months. If that rate climbs as more properties are released to the market, a revenue surprise might trigger another swing up. Just don’t expect a smooth ride.

Carla Fried, a senior contributing editor at ycharts.com, has covered investing for more than 25 years. Her work appears in The New York Times, Bloomberg.com and Money Magazine. She can be reached at editor@ycharts.com.