Roche Pharmaceuticals (RHHBY) had looked to offset the loss of marketing exclusivity for its blockbuster cancer drug Herceptin in Europe come 2014 with the recent launches of two new HER2 targeted agents. Given oncologist use of Perjeta, one of the new second-generation treatments, has been less than expected since its approval last year, word that European regulators have endorsed a new subcutaneous formulation of Herceptin comes as good news for shareholders of the Swiss drug maker.

Breast cancer is the most common cancer among women, with about 1.4 million new cases diagnosed worldwide each year, according to the World Health Organization. Overexpression of the HER2 protein, which increases quantities of the human epidermal growth factor receptor 2 (HER2) found on tumor cell surfaces, is a particularly aggressive form of the disease. 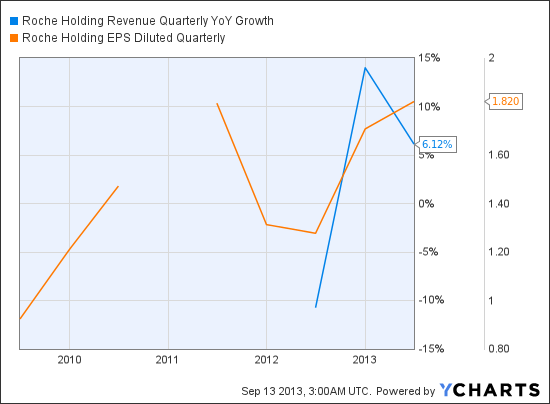 Herceptin (trastuzumab) is a humanized monoclonal antibody, designed to target and block the function of HER2 by activating the body’s immune system and suppressing HER2 signaling. With demonstrated efficacy in treating both early and advanced (metastatic) HER2-positive breast cancer, Herceptin generated sales of $3.28 billion in first-half 2013, representing 27.4% of the $11.93 billion of the drug maker’s oncology portfolio – exceeded only by the hugely popular vascular endothelial growth factor inhibitor Avastatin (bevacizumab), which, approved for treatment in a variety of cancers, including lung and brain tumors, contributed $3.3 billion to top-line growth in 1H:13.

In 2011, HER2-positive disease market accounted for no more than 25% of overall breast cancer cases, yet earned 55% of the $8.6 billion generated in breast cancer sales. Recent findings by analytics firm Decision Resources also reveal that major-market (industrialized countries) sales for treatment of breast cancer will rise to approximately $10.9 billion in 2018, before plateauing around 2021.

In May 2013, anticipating generic competition to Herceptin by mid-decade, Morgan Stanley (MS) circulated a research report that forecasted a dramatic drop in Herceptin revenue: annual peak global sales of $6.9 billion in 2015 plummeting to $2.8 billion by 2018.

Expecting price erosion from Herceptin generics, too, management at Roche initially modeled a growth strategy that defended its HER2-positive breast cancer franchise by demonstrating to oncologists the benefits of using its own discounted Herceptin in concomitant therapy with novel, premium-priced HER2 positive therapies, which currently include Perjeta and Kadcyla.

For example, Perjeta (pertuzumab) inhibits HER2 and HER3 pairing reception (called dimerization) on cancer cell surfaces. Designed specifically to target a different region on HER2 receptors, the drug is believed to complement, rather that compete with Herceptin. Research suggests that combining the drugs provides a more comprehensive blockage of HER2-driven mitogenic-signaling pathways.

Unfortunately, first half sales of $115 million have been underwhelming (though expect management to proffer a dissimilar rodomontade). Analysts at Cowen Group (COWN) attribute lackluster sales to the drug’s “restrictive labeling.”

Surveyed opinion leaders told the investment house that despite Perjeta’s efficacy, in “the absence of distinguishing data” there is little compelling reason to use the drug at present. The labeling is limited to those patients with metastatic HER2-positive breast cancer who have NOT previously received anti-HER2 therapy plus chemotherapy. Ergo, given a monthly cost of $5,900 – 31% more expensive than Herceptin therapy – oncologists also stated that third-party payers will not reimburse for off-label use.

Jefferies Group estimates peak sales for Perjeta at $1.9 billion. However, this number could be way too optimistic. GlaxoSmithKline (GSK) has an HER2-positive treatment, called Tykerb (lapatinib), which has been around since 2007 and was supposed to hit blockbuster status of $1.35 billion annually. In 2012, Tykerb’s global sales totaled $362.5 million. Insurance companies rarely reimburse for off-label, expensive therapies like Tykerb, too (similar indication to Perjeta) – referencing the rejection with the bromide “investigational.”

That said, should Perjeta overcome Tykerb’s limitations and demonstrate efficacy in other indications, such as in an adjuvant setting (micrometastatic breast cancer cells that have escaped the breast and regional lymph nodes but have not yet had an established identifiable metastasis) and/or use in the clinical setting before surgery (supplemental Biologics License Application was filed in early July), the drug could exceed all expectations and generate an estimated $8 billion in peak annual sales!

Notwithstanding Perjeta’s uncertain future, commercial viability for Roche’s Kadcycla (trastuzumab emtansine or T-DM1) looks promising. Though currently only approved for the treatment of people with HER2-positive metastatic breast cancer (mBC) who have received prior treatment with Herceptin and a taxane chemotherapy, surveys suggest the drug’s unique mode of action could make the treatment stand-out in a crowded field: Kadcycla is as antibody-drug conjugate (ADC), a new kind of targeted cancer medicine that incorporates HER2-directed anti-tumor properties (trastuzumab) with the targeted delivery of chemotherapy (DM1) to HER2 over-expressing cancer cells.

Awareness of the drug is high among oncologists, patients and advocacy groups. Favorable tolerability, minimal toxicity, and progression-free survival data are benefits being cited that suggest early and widespread adoption of Kadcycla is likely. Assuming expanded labeling, such as Kadcycla use in a first-line setting with an HER2-positive regimen, estimates forecast peak annual sales of $8.5 billion by 2020.

Convenience advantages of Roche’s new injectable version of Herceptin could outweigh the lower price advantage of a biosimilar trastuzmab, especially in a metastatic maintenance setting: The subcutaneous form of Herceptin is a ready-to-use liquid formulation that is administered as a 600 mg/5 ml fixed dose every three weeks, simplifying healthcare procedures by removing the need for reconstitution or dose calculation according to the body weight of the individual. Timesaving advantages cuts the treatment time down to just two to five minutes, from 30 to 90 minutes to administer the drug intravenously.

Though the availability of biosimilars will likely result in some reimbursement pushback, a bundled strategy offering discounted Herceptin (if purchased with Roche’s other branded HER2-positive treatments) should mitigate market share erosion issues, especially when presented with a cost-analysis setting showing “higher value per patient-treatment years” of subcutaneous use Herceptin in combination therapy.

Given Roche’s expertise in diagnostics, genomics and drug discovery – there are 68 new molecular entities in its pharma pipeline – shareholders could be handsomely rewarded in coming years as the company expands its leadership position from oncology to related fields, such as immunology and neuroscience.

The stock sells at a slight premium PE multiple to its peers, which suggests investors still see a growth story here. 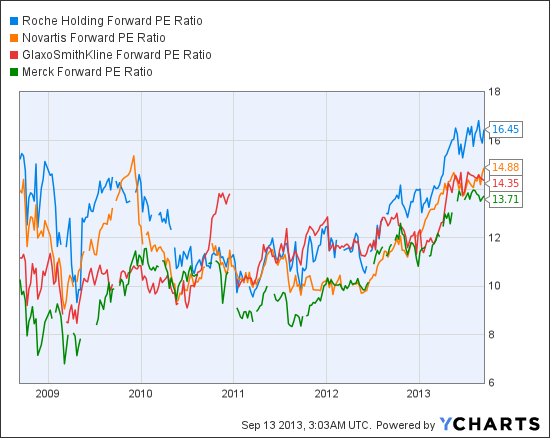 David J. Phillips, a contributing editor at YCharts, is a former equity analyst. His journalism has appeared in Bloomberg BusinessWeek, Forbes, and Kiplinger's Personal Finance. From 2008 to 2011, David was a reporter for CBS News Interactive. He can be reached at editor@ycharts.com. Read the RIABiz profile of YCharts. You can also request a demonstration of YCharts Platinum.