If you’re sniffing around looking for values in the energy sector, the just-reconstituted Market Vectors Wide Moat ETF (MOAT) that tracks the Morningstar Wide Moat index needs to be on your must-vet list. For the upcoming first quarter of 2015, eight of the 20 spots in the equal-weighted portfolio will be energy stocks that have the double allure of possessing a competitive wide moat and a share price that Morningstar estimates is a discount to fair value.

The three steepest discounts are Schlumberger (SLB), National Oilwell Varco (NOV) and Williams Companies (WMB) all selling at discounts of at least 25%. Those discounts are based on a fresh round of reduced fair value estimates from Morningstar that reflect the sell-off in oil prices.

A quick aside if you’re not familiar with the success of the wide moat index: Morningstar’s index has a terrific long-term record, and the Market Vectors ETF that was launched in mid 2012 to track it has in its short history has managed to more than keep pace with the SPDR S&P 500 ETF (SPY). (Full disclosure: Morningstar is an investor in YCharts.) 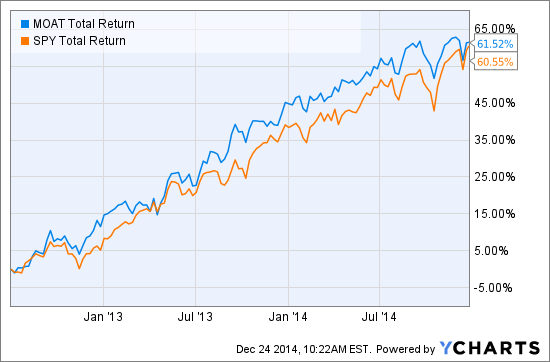 A testament to the stock-picking chops for the Wide Moat ETF is that outperformance comes despite having a 49 basis point expense ratio drag, compared to just 9 basis points for the SPDR S&P 500 ETF.

When Morningstar announced the reconstitution on December 19th, Schlumberger was the best wide-moat value trading at a 35% discount to Morningstar’s $105 fair value estimate. A week later the value hawks had already descended and started buying in, narrowing the discount to 20%. Sure, that squeezes the margin of safety a bit, but it is still a significant gap for the leading global oil services firm. It’s worth noting that Schlumberger investors didn’t quake in their boots when competitor Halliburton (HAL) announced its $34 billion merger with Baker Hughes (BHI) in mid November. Schlumberger has outperformed both: 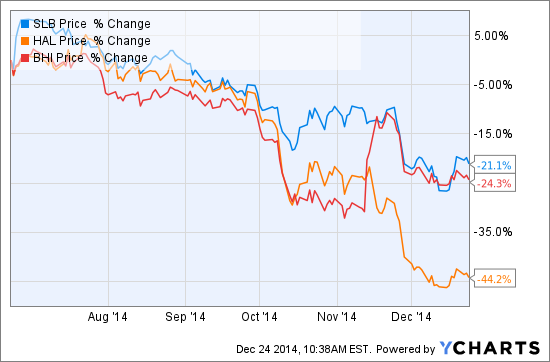 Earlier this year Schlumberger’s trailing 12 month PE ratio had crossed above the trailing 10-year median. As shown in this chart that has proven to be a telling warning signal. But after the recent sell-off, the PE ratio is now well below the historical median. 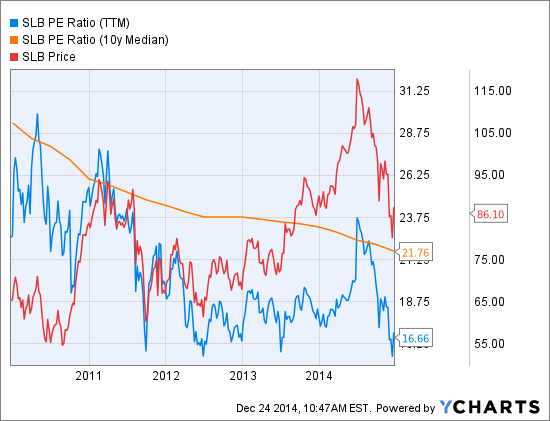 While Schlumberger is the leading wide moat option in terms of its relative valuation to fair value, Halliburton is in fact the steeper value opportunity, though it only rates a “narrow” moat from Morningstar. (To be clear, only about 10% of the 1500 or so companies Morningstar analyzes are given the wide-moat designation.) Halliburton recently sold at a 35% discount to fair value, while National Oilwell Varco was near a 23% discount. And yet Halliburton’s return on equity and return on assets lead the pack: 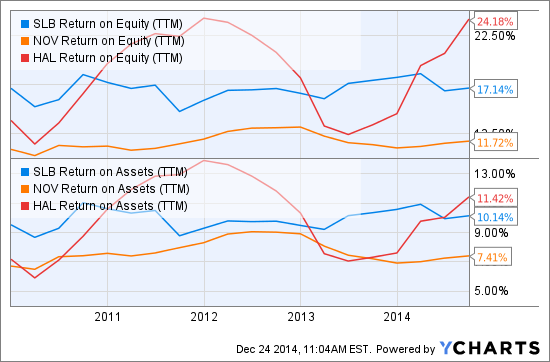 Those steep discounts may take plenty of time to close, especially if oil prices remain low for an extended period. (And of course, as they are estimates, there is no guarantee fair value will ever be realized.) But for the patient value investor, this is put-up-or-shut-up-time. Unless you are convinced oil prices will never rebound and that global economic demand is forever doomed, the current prices of these oil service leaders are not just a relative value in a broad market making new highs, but also what looks solidly like absolute values as well.