This is by far the most common issue we see. Onetime charges like goodwill impairments occur frequently, as do onetime gains like those from the sale of part of a business or some of its assets. But when earnings in the price-to-earnings multiple are not adjusted to reflect the onetime event, investors can be misled.

For example, Microsoft Corp took a onetime, $6.2 billion write-down of goodwill associated with its prior purchase of aQuantive in 2012. Including the write-down, earnings per share for the previous 12 months were $1.83. Excluding the write down, earnings for the same period would have been $2.56. This means that reported earnings were only 71.5% of what they would have been without the write down. A quick bit of math shows that the resulting PE ratio is 1.4x a more appropriate normalized number, meaning that if Microsoft's reported PE ratio during this period was 14, the normalized version should have been closer to 10. 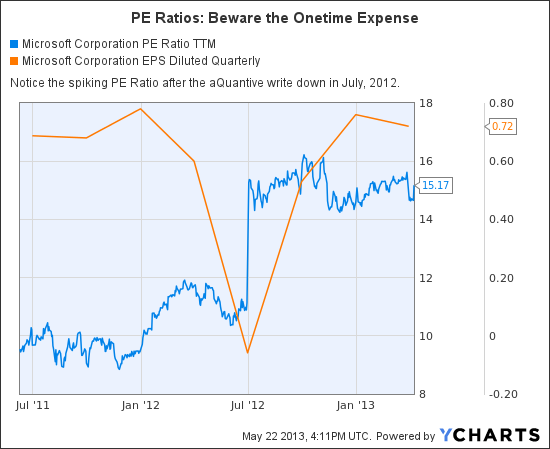 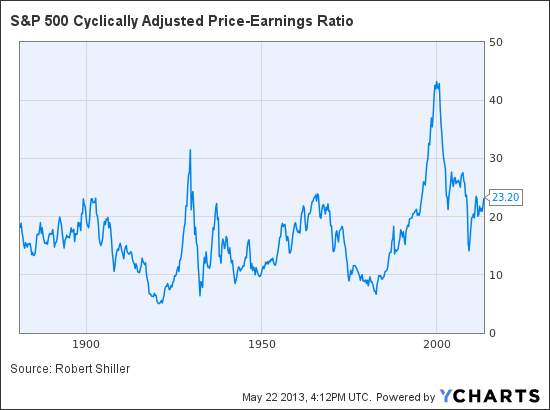 In retrospect, it seems clear that the market was unreasonably depressed in 1920 and unreasonably optimistic in 1999. However, comparing valuations between companies at either point in time would have given no such indication. The depression and the mania were too pervasive. What looks silly in retrospect would have seemed justified without historical perspective.

This ebb and flow is not always a full-market phenomenon. A quick look at valuation multiples in the technology sector on YCharts as of the December 31, 2012 market close shows the differences between valuations in industries using PE ratios; for reference we include the S&P 500 PE Ratio and Warren Buffett's suggested "fair multiple" for excellent operating businesses. As of the beginning of 2013, Health Care Information Services certainly are a hot item, but do they deserve a valuation multiple of 3x Warren Buffett's idea of a "fair" value? Only time will tell.

Little surprise that two of the largest holdings of David Einhorn -- the famous long-short value hedge fund manager -- as of the end of 2012, were data storage companies: Seagate Technologies and Western Digital Corporation. Both are part of the third lowest-valued industry in the tech sector. Even more interestingly, those two companies were the lowest valued in the depressed industry, with PE ratios of 4.00 and 5.07, respectively.

Price-to-sales ratios are excellent as long as a company's sales can reliably be converted to earnings. But especially in hyper-competitive industries, sales multiples can be rendered meaningless in a hurry as new competitors enter and increased price competition erodes margins.

It is curious that price-to-sales ratios are commonly used for businesses whose earnings fluctuate wildly or those that have not yet earned positive net income. It is exactly in these situations that an investor should be most skeptical of valuation multiples.

Take, for example, the astounding contraction in gross margins that Groupon faced as competitors flocked to the daily deals industry. 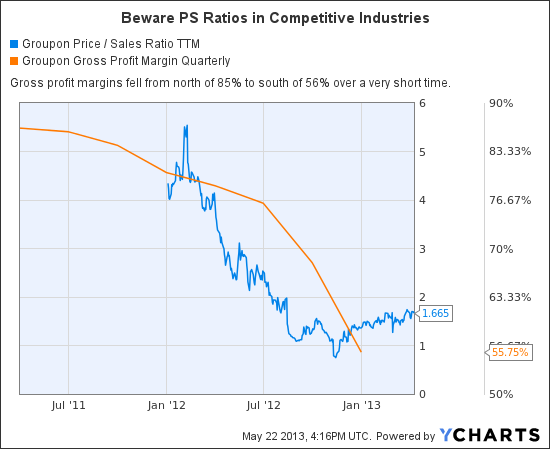 Groupon’s early price-to-sales ratios of 6x plummeted as the investing world realized that high returns in an ultra-competitive industry could not be sustained. This pattern is more common than it may seem. Businesses with attractive margins attract competitors quickly, and if price is the industry’s key competitive weapon, competition kills margins.

Gotcha 4: Quoting price-to-book multiples without addressing return on assets or return on equity.

Just as price-to-sales ratios require steady profit margins to be of use, price-to-book-value and similar metrics require steady return on capital numbers (ROE, ROIC, or ROA) to be useful. Assets are only valuable -- and should only be used as a proxy for the value of a business -- if they are economically productive.

If Bank of America can turn the returns situation around, it could very well turn out to have been undervalued, but the low current price-to-book ratio makes sense with the larger context -- a company that invests its assets poorly should be valued poorly.

The key takeaway: when considering differences in price-to-book between firms, also look at return on capital.

Gotcha 5: Failing to account for depreciation expenses in a valuation multiple’s fundamental metric.

Two multiples in particular are egregious offenders in this regard: price-to-cash-flow and EV to EBITDA. Depreciation is a real expense, and for many capital-intensive businesses it is a large expense. As Warren Buffett famously wrote in his 2000 letter to shareholders, "References to EBITDA make us shudder -- does management think the tooth fairy pays for capital expenditures?"

Nathan Pinger is YCharts’ Product Manager. His analysis has been quoted in Forbes and the New York Times. An investor since his mid-teens, he holds an MBA with High Honors from the University of Chicago Booth School of Business and BAs in Mathematics and Economics from the University of Wisconsin-Madison, where he graduated Phi Beta Kappa.

YCharts is a Chicago-based financial information provider. We are building an ever-expanding financial and economic data set - as well as the tools to access and interpret that data - to help investors and businesspeople make better decisions and earn more from their investments. To learn more, request a demo or call us at (866) 965-7552.