Groupon: Has Lefkofsky Left the Building?

Eric Lefkofsky is the chairman of Groupon (GRPN), and it isn't entirely clear that he feels the pain other shareholders are experiencing. The latest evidence: the Wall Street Journal reported that he’s poaching Groupon’s top salesperson for another one of his ventures.

That seems weird for a guy who’s still a big shareholder, right? Surely he must be tearing his hair out about the falling stock price: 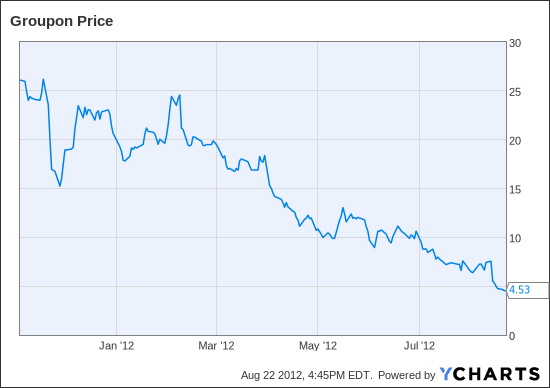 He's not –- because he already made a lot of money. And let’s recap that.

In April 2010, as word of the deal site spread to national media outlets, they sold $67 million worth of stock.

In December 2010 and January 2011, as a potential initial public offering approached and after Groupon was touted by the likes of Forbes as the fastest-growing company ever, they cashed out $319 million worth of stock.

So that’s $398 million, all in. Bloomberg has already pointed out that his transactions were “unconventional.” And there’s another note in the S-1 that makes you wonder, especially at this point, if he had mentally checked out even before the IPO. In the section that outlines risk factors, he seems decidedly noncommittal about the whole endeavor. In Groupon’s words: “Although Mr. Lefkofsky historically has devoted a significant amount of his business time to Groupon, he is under no contractual or other obligation to do so and may not do so in the future.” Also: his other investments “may be in areas that present conflicts with, or involve businesses related to, our operations.”

Ok, then, Eric. See you around.