Emerging Market ETFs, Funds: What To Watch For

Chances are the emerging markets sleeve of your portfolio didn’t shine last year. The iShares MSCI Emerging Markets ETF (EEM) lost about 3% in 2014 on a total return basis. But as the chart below shows, what often gets lost when investing in this sector is that it’s not some circa-1997 homogeneous monolith where all markets tend to move in lockstep, but the aggregate of very disparate economies and stock markets. The iShares MSCI Russia Capped Index ETF (ERUS) and the iShares MSCI Emerging Markets Latin America ETF (EEML) took it on the chin -- no surprise given their dependence on commodity revenue -- while the iShares MSCI India ETF (INDA) had a very strong year: 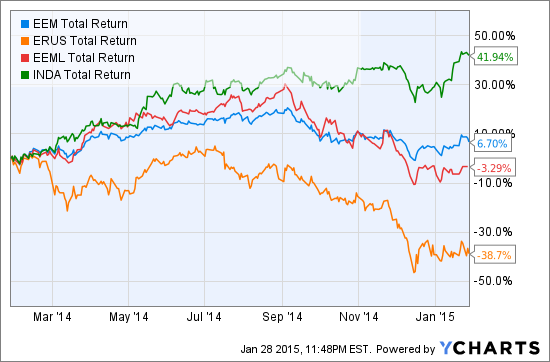 In an investment outlook, William Blair makes a case for the heterogeneity playing out among individual issues as well. William Blair focuses on quality companies that are generating plenty of free cash flow—from both organic revenue growth as well as operational jujitsu.

Back in 1997 the William Blair folks worked from a global universe of 1,300 stocks that met their quality parameters, with only 10% of those in emerging markets. Fast forward to today, and the report notes that “not only has the universe doubled in size, but the number of high quality companies in EMs has risen seven-fold, and is now on par with the number of high quality companies in the U.S.” And there is a wider dispersion among returns, as “the market is much more aggressively trying to differentiate between really true, sustainable quality companies and those that are not. The market appears to be paying for this as the differences in valuation are also notable.”

Here’s how the William Blair Emerging Market Growth mutual fund (M:BIEMX) has rolled relative to the iShares MSCI Emerging markets fund over the past year: 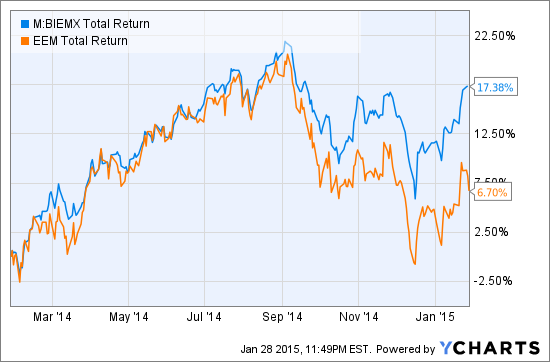 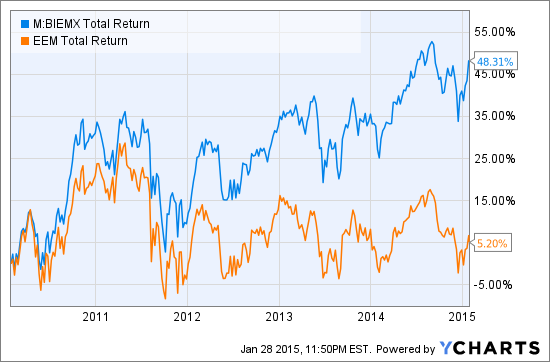 Granted, neither portfolio nor time frame is uplifting. But if you are committed to the notion of global diversification, perhaps some tactical cherry picking of stocks and markets by active management might be worth considering. FWIW, according to the latest data from S&P Dow Jones Indices, about one-third of actively managed emerging market funds outperformed their benchmark index over the five years through mid 2014 (latest data available). While that’s still a decided minority, it is better than the 25% success rate for U.S. stock portfolios.