On Wednesday, June 12th, after market close, Safeway (SWY) said it would sell its Canadian operations for $5.8 billion Canadian Dollars ($4.0 billion Canadian dollars after taxes). The stock promptly shot up about 31% after hours, ending at a price near $30.25, or a market cap of $7.29 billion.

I'd been long the stock since January, and of course this prompted the question: sell now or buy more? After some back-of-the-envelope calculations, I bought more.

One problem: I got the analysis wrong.

In the hopes of helping the reader to avoid the same type of mistake, I uncovered my error and am sharing a more complete analysis here.

At market close on June 12th, the whole company was selling at about 5.1x operating earnings, so we'll assume that was a "fair" multiple for the business at that time. 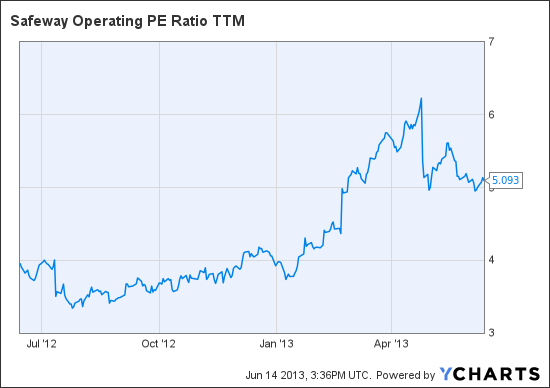 Thankfully, Safeway breaks out its Canadian operations in the notes to its financial statements in its most recent 10-K. With this information, the goal is straightforward: determine the value of the remaining US operations plus the “excess cash” to be gained from the sale of the Canadian operations. The numbers based on market close prices on June 12th are in the table below.

Lines one through four of the table above should be self-explanatory. Operating income multiplied by the price-to-operating-income multiple for each country's business should approximate the value of each country's ongoing operations, and the purchase price of the Canadian operations was about $4.0 billion (U.S. dollars), after tax.

I mistakenly went long as the shorts jumped in, and guess where the stock ended the day? With a market cap of $5.98 billion. That’s within $50M of my corrected analysis’s suggested price.

In investing, mistakes are painful and expensive. Ignorance and stubbornness are worse. At the end of a long day watching the stock fall, I went to my home whiteboard and explained the analysis to my wife. With a second look, the mistake was obvious. I failed to subract the value of the ongoing Canadian Operations - thus overvaluing the company by about $1.85 billion. With the new numbers showing no more obvious immediate profits on the horizon, I closed out the position.

Nathan Pinger is YCharts’ Product Manager. His analysis has been quoted in Forbes and the New York Times. An investor since his mid-teens, he holds an MBA with High Honors from Chicago Booth and BAs in Mathematics and Economics from the University of Wisconsin-Madison. He can be reached at editor@ycharts.com. You can also request a demonstration of YCharts Platinum.