The week before Christmas was a crummy one for those holding Dunkin Brands (DNKN) shares, as the donut-and-coffee franchise king reduced its guidance on results for the fourth quarter of 2014 and for all of 2015 -- same-store sales increases coming in lower than previously forecast being the most notable metric. 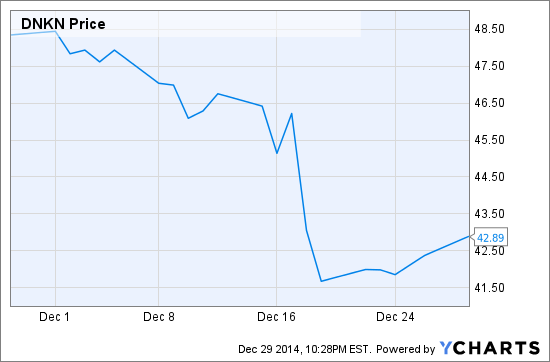 Dunkin’s CEO Nigel Travis -- “Nigel” seems an upper crust name for a donut boss, but the man has down-market cred; he previously worked at Papa John’s (PZZA), Blockbuster and Burger King (BKW) -- promised, beyond 2015, “we are committed to returning to double-digit growth.” The company continues to add hundreds of stores.

Those seeing last week’s stock dive as a buying opportunity, however, might think twice. Once because Dunkin shares remain dear, trading at a forward PE ratio of nearly 25. That reflects our ebullient market, with major indexes hitting records in recent days, and the general mania for coffee-driven investments. Twice because wringing sustained increases in same-store sales from coffee-and-pastry joints, going forward, is going to require some fancy footwork. Dunkin mightn’t be the one to pull it off. 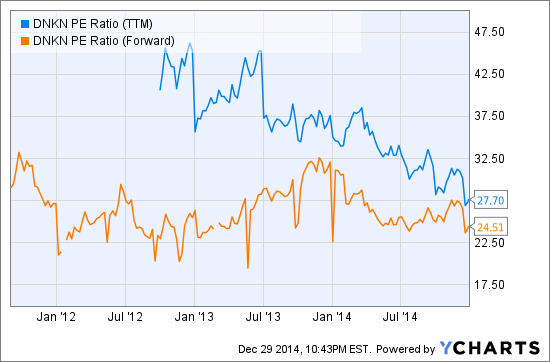 Overall, the view here is that coffee has legs. We like it. Drink lots of it.. And we’re impressed by the amount of smart product development, marketing and operations management occurring in the world of coffee. But simply betting on the joint that serves lots of hot brown liquid in big white cups could prove a loser.

Dunkin doesn’t strike us as being nearly as sophisticated a retailer as Starbucks (SBUX). Since Howard Schultz returned as CEO, the company has pulled off an impressive turnaround and established itself as a productivity machine. Its embrace of mobile ordering and its success in loyalty programs offer the hope of continued strong growth. The company, in fact, sees itself nearly doubling in size in five years.

There might not be room for all coffee players to hit their forecasts in coming years. Starbucks seems a better bet. And even with it, we noted recently, at current valuations investors are required to have strong belief in the company’s complex and difficult-to-execute plans.

The gourmet coffee movement is just starting. But it could fragment coffee sales the way craft brewers have with beer sales. The losers in such a development, of course, would be the dominant incumbents like Starbucks, Dunkin and Keurig Green Mountain (GMCR). 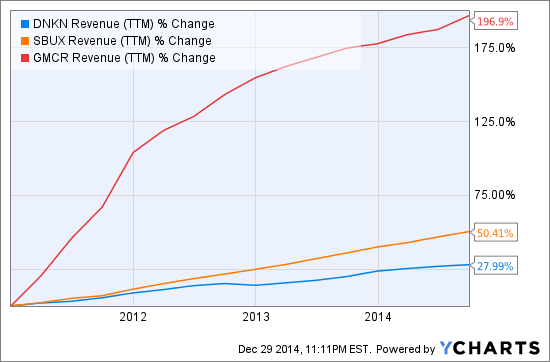 Dunkin growth has lagged that of Starbucks, as seen above. The valuations aren’t that far apart. The more innovative company would seem the safer bet at these prices. 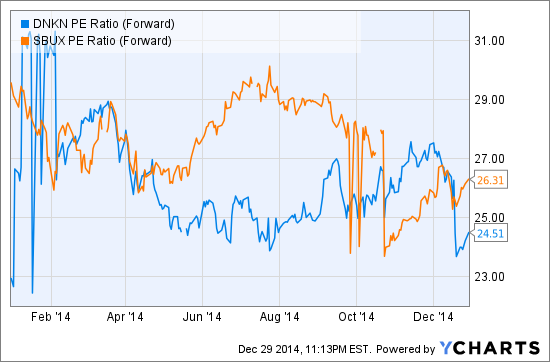 Jeff Bailey, The Editor of YCharts, is a former reporter, editor and columnist at the Wall Street Journal and New York Times. He can be reached at editor@ycharts.com. Read the RIABiz profile of YCharts. You can also request a demonstration of YCharts Platinum.